A bunch of Tarot Enthusiasts on Facebook decided to have a Tarot Bag exchange, where people chose partners and made each other bags. This idea was the brain-child of the pixie-ish Gidget London, a lively and creative member of the group.
I knew it was a good idea the moment I read about it, and immediately jumped on the bandwagon. “I’m game!”
Almost as quickly, a friend in the group spoke up and said she’d love to partner with me, and we were off and running.

Jera-Babylon Rootweaver, aka “Andi” -my partner in this project, loves saturated, hot colors, and so I chose an iridescent fabric in a flame orange, satin ribbon in an intense deep red, golden beaded fringe, deep red eyelash yarn, and a deep golden, red and brown chunk of tiger’s eye for the proper juju. 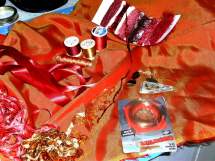 I collected together some charms to also give the piece some symbolic coherence- a little golden key, a lucky-blessing hand, and a five pointed star- all in brass, with a chunk of tiger’s eye on copper wire for ‘conductivity’.

I made these into a sort of tassel, and put the whole thing on a removable fishing swivel, so that it could hang inside or outside the bag, or be removed entirely.

I also did a shisha embroidered sun on the front, using a piece of mica that I peeled off the front of a chunk I picked up from a pile of tailings at a gem mine a little way down the road from where I live, here in Maine. The mine is a place where they get the rare “Alice Blue” tourmaline, which is found only in Maine.
I trimmed it carefully into a little circle, and used sulfur yellow thread to anchor it firmly to the front of the piece.

Shisha Sun, made with Maine Mica

Four horned cowrie shells from the Canary Islands surround the sun, in a sort of compass rose orientation, propped by little golden rocaille beads. A funny thing about those: I’d originally sewn them on to have the yellow, curved backside facing out, because I thought they would ‘sit’ better against the fabric, and because I thought the yellow color of the backs would harmonize better with the sun- I sewed them tightly to the cloth, and sewed the upper edges of the bag together, closing the lining, so that the inside embroidery stitching would not snag on the cards that would someday live inside the bag. Then I put the piece down, and went off to make dinner. After dinner I got distracted and did something else, so it wasn’t until this morning that I returned to the project. When I picked it up, I noticed that something was odd- the cowries were all turned around! The open sides were all facing out! I had already sewn the lining closed, so for a moment I just stood there glaring at the bag in shock. Then it hit me- cowries are sacred to the Goddess, and it is the open side that is her symbol.
I decided to honor that, and let them be. 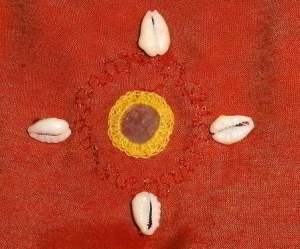 I failed to take into account the fact that I hadn’t sewn creatively in well over a year, and had mainly sewn patches, replaced buttons, and darned socks in all that time. I have a snazzy, brand-new sewing machine, which I’d almost completely forgotten how to use. And, the selected fabric was slippery and thin, and kept getting caught in the feeder feet. Arrrgh!

I suddenly remembered reading about using tissue paper to protect the fabric from behind, and also (fortunately!) cut a bit of extra fabric and ribbon to practice on, to make sure I didn’t ruin anything on the final product. I practiced all the stitching carefully on that extra bit of fabric first, and I’m so glad I did! because there were some really wretched moments while things slid around and got nasty. 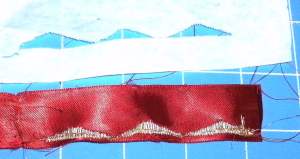 Thank goodness for scraps to practice on!

When I sewed in the fringe, the binding showed, so a wrapped and knotted eyelash yarn in a deep red around it, and then sewed it into the seam. It made a nice color contrast, which unfortunately doesn’t really show in the photograph. I was so happy, because it was almost done! 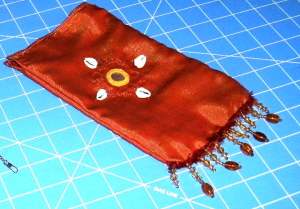 All that remained to finish the top, was to sew on the embroidered ribbon to put the drawstring in, and attach the charm tassel. 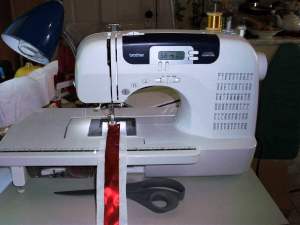 Embroidering the Ribbon for the Drawstring "Sleeve"

In between all the steps, I ironed the bag carefully, and used a diluted solution of Florida Water, in which I had placed pieces of Iolite, Tiger’s Eye, and Amethyst, to infuse their qualities into the finished piece, thereby enhancing and charging the bag with more positive energy. 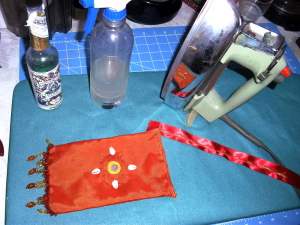 Iron as you go, with diluted Florida Water/Gem Infusion 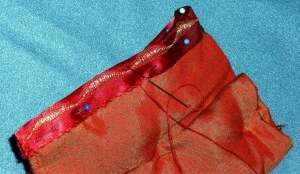 While sewing on the “sleeve” I folded up and pinned the body of the bag around the shells and bead fringe, to keep the thread from snagging on them.

Finally, the bag was finished! 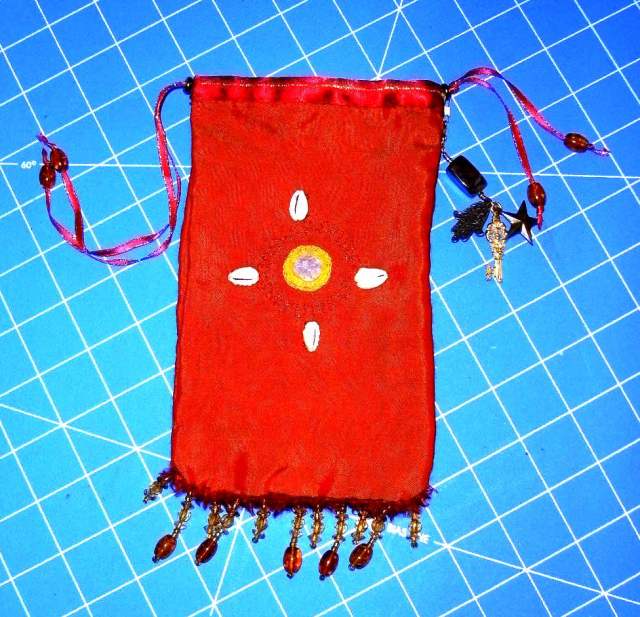 This bag was finished at precisely 3:33 pm EDT, an unplanned bit of serendity!

I have been reading Tarot since January 1975, and teaching Tarot since 1978. Several of my students have become the best readers I know- which is why I started giving classes in the first place- so that I could always find someone to get a really superior reading from! In the years since I began reading, the interest in Tarot, other forms of divination and earth-centered spirituality has exploded to amazing proportions, and the art of reading has itself evolved tremendously. So much has changed, and I am so pleased to find myself cresting the wave again and again, as this fascinating science of soul journeying deepens and becomes ever more vibrant. I find myself ever changing, ever learning more and more, as I too, evolve, grow and embark again on the journey to the center of myself. Welcome to the edge of understanding, where you can simultaneously embrace the ancient paths, and surf the most current breakers of your own highest being!
View all posts by tarotcircle →
Gallery | This entry was posted in Handcrafting, Shisha Embroidery, Tarot Bag Exchange, Tarot Bags, tarotcircle and tagged beadwork, charging work with energy, charms, Cowry, Craft, Facebook group, Florida water, gem infusion, Maine, sew, Tarot, Tarot bag, Tarot bag exchange, Textile. Bookmark the permalink.

9 Responses to Creating a Tarot Bag