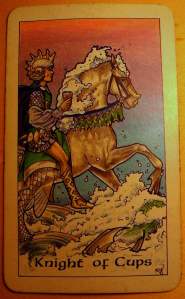 The knight of cups
Knights are usually representative of young men, though in this day and age, they can also be young women with a great deal of dash and initiative. Typically, Knights of any Suit are the most impulsive and mobile of all the court characters. They are past the dependency of Pages, but not yet burdened with the heavy but also stabilizing responsibilities of Kings and Queens. A notable exception is the Thoth system, where the knights are typically thought of as older men. However, today’s card is selected from the Robin Wood Tarot, and has the more modern and orthodox affiliation.
Typically, cups cards represent people who have the astrological element of water dominating their charts and personality types. They tend to be sensitive, creative, gentle and romantic. They are emotion driven, and often have a pronounced intuitive ability, and can also be chameleons- catching the mood and even the mannerisms of the people around them. There is a shy, youthful air about them, though they can be very sociable, and wonderfully lively with those with whom they have established a high level of trust and comfort.
The Knight is no exception to this rule, in that he is likely to come on the scene as a charming and attractive personality, with a dreamy and sensitive manner.  He is likely to be a romantic interest, though this is not always the case. Cups ruled men are often thought of as somewhat effeminate, but most women find them very appealing and sensual. They tend to be very touch oriented, and often have careers in the arts and healing sciences.  They will be sensitive to environment and may have highly tuned senses- noticing subtle things on a gut level that most other personality types would miss. Greatly appreciative of music, tasteful decor, good food and drink, they can easily fall prey to a determined suitor who is observant and persistent. On the down side, they tend to be moody, self-indulgent, and can find themselves eating, drinking and drugging to excess. There’s a strong temptation to fall into addictive behaviors, and a tendency toward indolence and depression.
If you are involved with a knight of cups type of person, don’t try to pin him down, he will slip through your fingers like water while muttering vague excuses. He can be forgetful when you want him to be sharp, but can also hold a grudge for a long time over something you’ve completely forgotten.  Don’t expect him to care about the designer outfit you’ve saved and slaved for, with an impressive name on the label- unless it’s got a wonderful texture, gorgeous colors and/or a very slinky cut and fit. If it looks and feels good, and is easy removed, that’s all that matters to him- it might as well be from Goodwill.
Don’t expect him to pass up a free meal, either. He’ll be late rather than early, but when he does show up, you’ll get a wonderful back rub and a fortune cookie that he saved for you, as a reward for your patience. If you really want him to hang around, feed him, play his favorite music, dress in soft textures and diaphanous layers and touch him lingeringly and often. Adorn your house with live plants and sweet smells, aquariums and soft mood lighting. Draperies and hangings, exotic objects, and floor cushions will appeal to this type also. He’ll enjoy books and movies of Sci Fi and Fantasy genres, or about mysticism and far away places. And, never ever throw out his favorite old fuzzy sweater -even if it’s moth-eaten, or faded soft jeans -or he will never forgive you! Expect him to be an eccentric pack-rat, with a secretive streak, but with many charming attributes that will make up for most of it.

Reversed, this could be a very sneaky person who is very jealous, with serious addiction problems. This personality type is, of all the suits, the most prone to neediness, a smothering clingy-ness, delusions, and an inability to tell fantasy from reality. Added to that is the impulsiveness of the Knights; the combination could spell out somebody’s spoiled problem child grown very large and hard to manage.
Kidney and liver ailments are also a possibility.
When the card is not specifying a particular individual, it is instead outlining some or all of these traits. You may be going through a “Cups Period” of your own. Be honest with yourself, and profit from the lesson.

As always, relevant comments and observations are very welcome.
Namaste!

I have been reading Tarot since January 1975, and teaching Tarot since 1978. Several of my students have become the best readers I know- which is why I started giving classes in the first place- so that I could always find someone to get a really superior reading from! In the years since I began reading, the interest in Tarot, other forms of divination and earth-centered spirituality has exploded to amazing proportions, and the art of reading has itself evolved tremendously. So much has changed, and I am so pleased to find myself cresting the wave again and again, as this fascinating science of soul journeying deepens and becomes ever more vibrant. I find myself ever changing, ever learning more and more, as I too, evolve, grow and embark again on the journey to the center of myself. Welcome to the edge of understanding, where you can simultaneously embrace the ancient paths, and surf the most current breakers of your own highest being!
View all posts by tarotcircle →
This entry was posted in Divination, fortune, interpretation, luck, Metaphysical, readings, Romantic Interests, Spiritual, tarot and tagged Cancer, charming, creative, exotic tastes, intuitive, Knight, Knight of Cups, mystical, Personality, Personality type, Pisces, romantic, Scorpio, sensitive, sensual, The Robin Wood Tarot, water ruled personality, water signs. Bookmark the permalink.